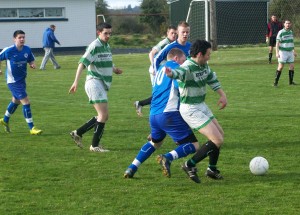 Grounds last Sunday evening. Rearcross made the better start and went on to enjoy long spells of dominance in the opening half and will rue not opening their account during this period. Derek O’Toole made the first incision after harrying Mike O’Brien, however the Nenagh custodian advanced to collect with just two minutes gone and then Derek O’Toole was unlucky two minutes later with a free kick effort. Willie 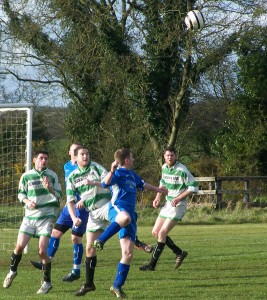 Darcy was a threat for the Brickfields side throughout and fired over the Rearcross goal in the 6th minute. Rearcross were robbed of the opener on the ten minute mark when Greg Kennedy combined with Derek O’Toole before the ball fell to Simon Kennedy who was luckless to see his well struck effort go inches wide of the upright. Rearcross had claims for a penalty waved on in the 21st minute while at the other end of the pitch Nenagh faced a similar outcome two minutes later. Rearcross keeper Eamonn O’Toole did well to punch clear under pressure from a Willie Darcy free kick midway through the half. Derek O’Toole was through on the Nenagh goal fourteen minutes before the break, however play was pulled back for offside. Declan O’Toole was next up for Rearcross with a well struck shot which flew over the target. Greg Kennedy’s free kick ten minutes before the break was on the mark, however Eddie Spillane got behind the effort to make a clean block. Rearcross were let off the hook three minutes later when Tommy Martin’s delivery flew across the goalmouth when only a touch was needed. It was turning out to be a difficult outing for Rearcross and that elusive goal was proving hard to come by as Diarmuid Sheehy’s well struck effort flew over the target. Eamonn Devitt was then in the action for Rearcross after closing in to deny Willie Darcy. The last action of the half saw Rearcross threaten again with a Derek O’Toole free kick and then Simon Kennedy got on the end of a corner kick to head wide at the back post to leave it scoreless at the break. Nenagh came close a minute in to the second half with a Danny Butler effort, however Eamonn Devitt did well to avert the danger. Rearcross battled gallantly throughout and Simon Kennedy linked up with Kieran Devitt to set up Declan O’Toole, however the offside flag was up. Nenagh counterattacked and Greg Kennedy blocked down from Tommy Martin while moments later Luke Kennedy’s shot lifted over the Rearcross goals. The green & whites defended sternly all through and Eamonn Wade’s well timed tackle thwarted

Tommy Martin on 63 minutes. A highly competitive affair throughout saw Eamonn O’Toole make a clean catch from a Willie Darcy free kick and then the Rearcross keeper got down to save at the near post from Tommy Martin with eighteen minutes remaining. Nenagh AFC took the lead in the 81st minute with a superb strike when JoJo Dillon’s corner kick broke to Willie Darcy who let fly with a left legged rasper that finished in the net despite the best efforts of Robert Harrington. Rearcross threw everything at Nenagh in the final minutes and were luckless not to take the tie to extra time firstly when Kieran Devitt was impeded on the edge of the box on 87 minutes, however claims for a penalty went unheard and then Derek O’Toole’s corner kick in the 92nd minute saw Eamonn Wade leap highest only to see his headed effort thump off the crossbar, the final whistle sounded seconds later as Nenagh AFC secured their sixth Barry Cup title. Rearcross will be disappointed to have lost out on this occasion, but have already won the First Division League and Shield and will look forward to next season’s return to the Premier Division. Nenagh AFC grafted well throughout and were delighted with their win in the end. Richard Fogarty representing the NT&DL presented the Barry Cup to Nenagh AFC captain Shane O’Gorman who was gracious in victory. 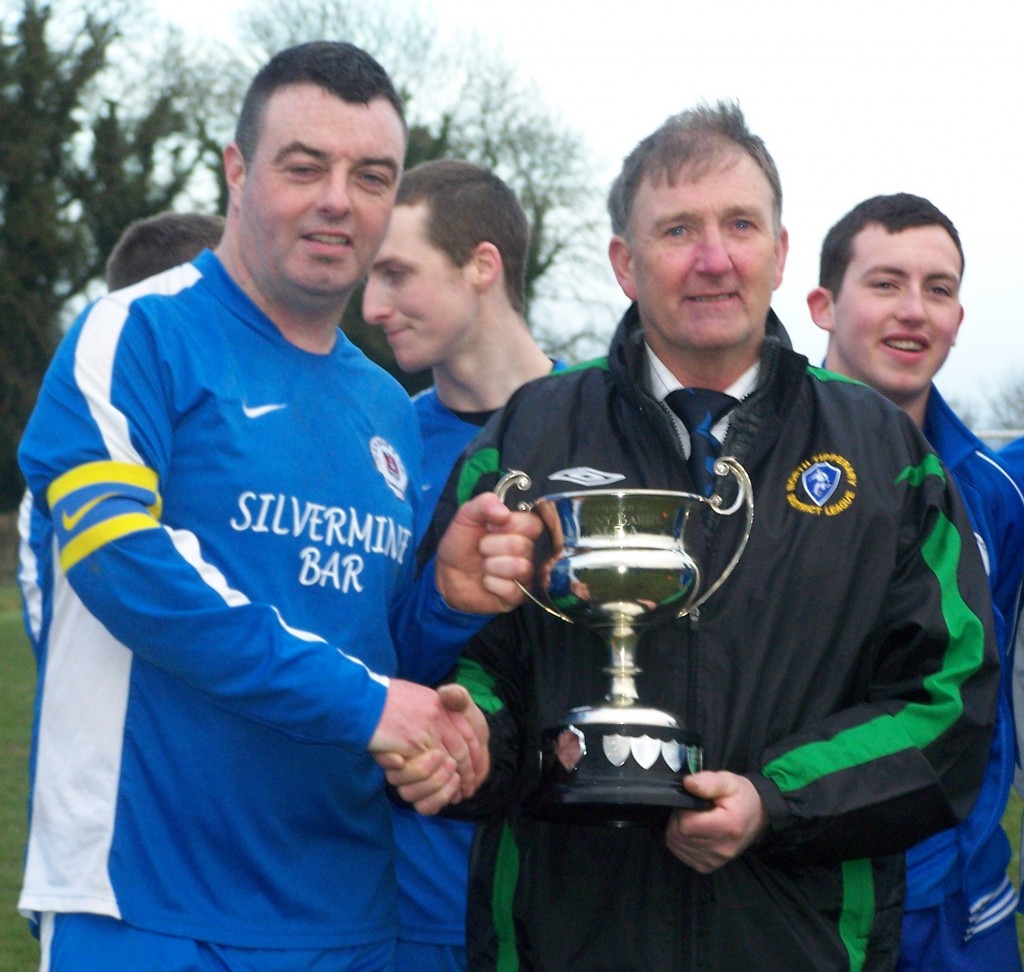 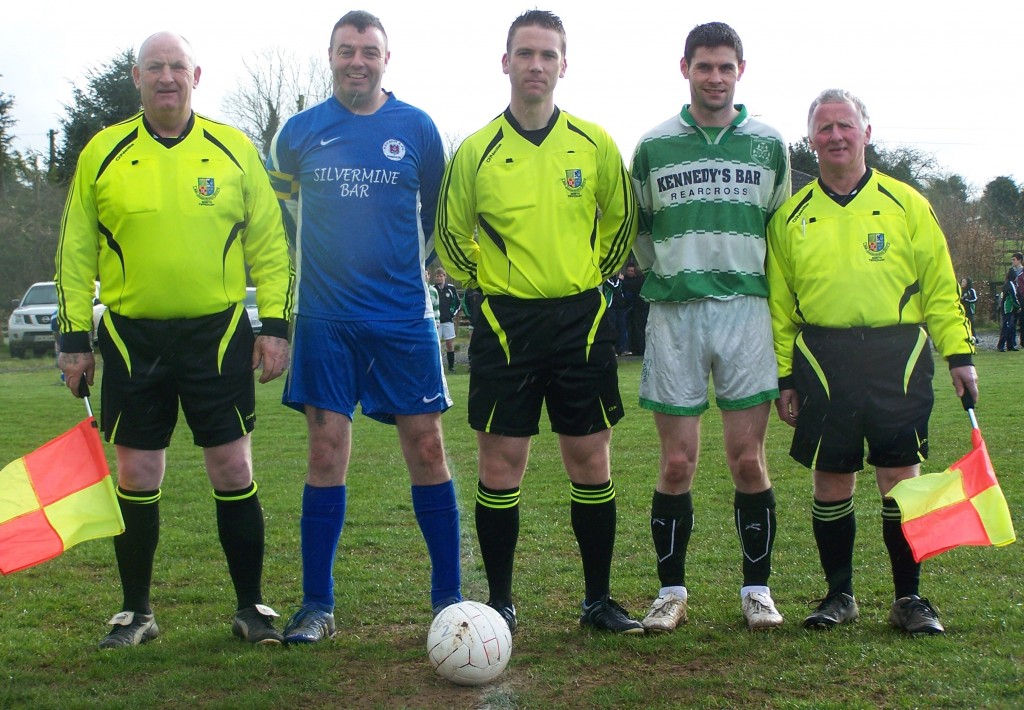 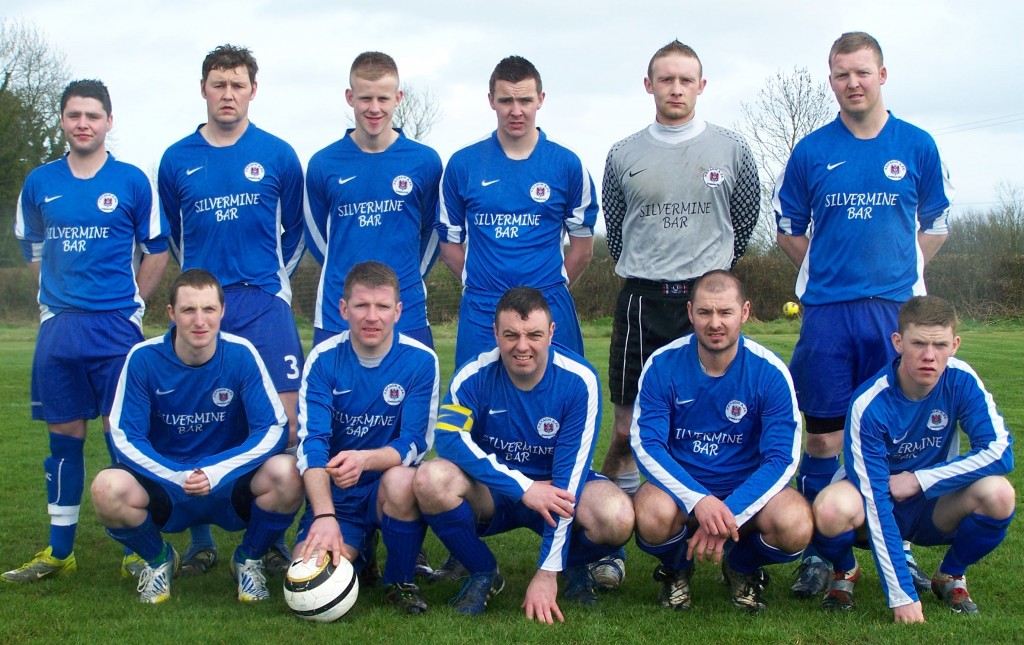 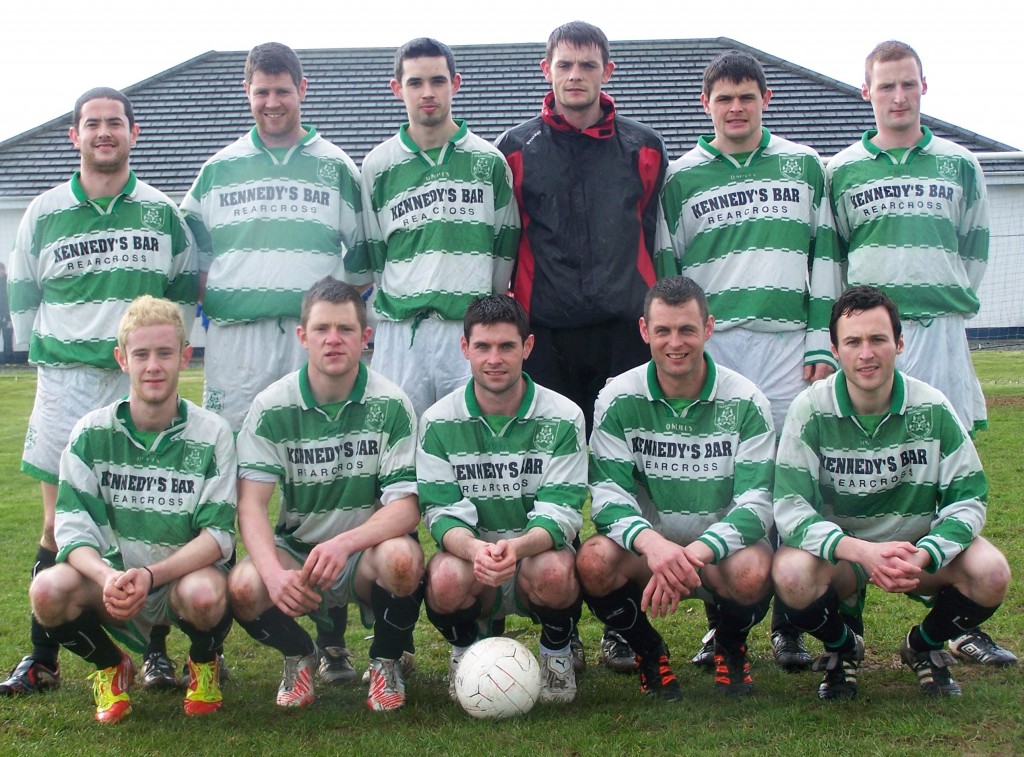